To say Baltimore and I have a love affair is almost an understatement. One of the things I love most about this enigma of a city is the art. Not well known for it’s fine arts, this city is perhaps a sleeper city of art- if only it was more supportive! But, thanks to its low profile, Baltimore has some intriguing artists.

Booda Monk grew up in the city, and grew up tagging buildings, as many teenagers in the city may have done at some point. But, unlike some teenagers, Booda became one of the great tag artists, profiled, most likely at some point by police, and known in the small community of spray paint artists. Booda, however, grew into translating his work onto canvas and skin. He still works on walls, and creates amazing three-dimensional pieces on the wall behind his shop on 25th Street in Charles Village. Walk by on a weekend, and if he’s working on a new piece, you’ll be welcome to stay a while and watch him work.

At Booda’s shop, 25th and Howard, you will find him either working on a piece of personal art (a tattoo) or a canvas, stenciled or free-hand or perhaps a T-shirt, skateboard or pair of sneakers! If it’s in front of him, he’ll paint it. His images range from soulful profiles to geometric compilations creating coy to graphic script. Booda brings the same depth and soul to his ink artwork that he does to his street and fine art. His forte is dimension and script. If you are looking for something unique to adorn your body with, stop in at the shop, and ask for Booda to draw a quick sketch for you- you’ll be commissioning him in no time!

Meanwhile, stop in at Station North Arts Cafe, have a coffee and peruse the paintings. http://stationnortharts.com/Home_Page.php

But, mind you, this piece is MINE. 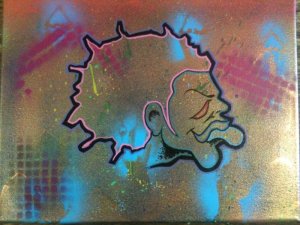